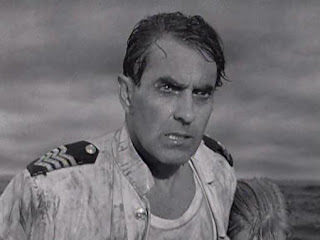 I had an allergic reaction to Blue Agauve sweetener last week. I put two teaspoons in my diet shake and licked the spoon not knowing what was next. It got pretty bad. My whole body got a rash and then blistered up. It took about four days lying flat to get better. I was thinking of my grandmother who had just passed and what she went through in her last moments, but really I think the spirit of my grandfather Robert (He died when my mom was 12 years old) was paying me a visit. He was in the big war and his ship sank and he swallowed lots of fuel and oil (Which may have brought the cancer that he died from). I was laying watching TCM movies. First they showed Flight of the Phoneix with James Stuart. I had watched it before, but this time my skin was on fire like in the desert heat in the movie (good movie, check it out) then next was the one that had me thinking of my grandfather "Abandon Ship" with Tyrone Power. I was belly sick at this time and I thought "at least I am not lost at sea" The captain who was referred to as "Captain, Brave Captain" (I think fIREHOSE wrote a tune about him, so maybe D.Boon was in the room too) He was catching slack from all the living people left. Anytime someone complained they would have to spend time overboard. It is an awesome movie. I am not going to spoil the end, but it made me think I was not so bad off. By Sunday I had weathered the storm and I headed over to my post at Crafted and spent a few hours there. I would not have faired so well, but with the help of my shipmates Raul Morales who so kindly brought the aid of healing Nettle Tea and Nettle herbals and my wonderful wife Sharon who looked on my wrecked self and said "You are getting better" she had to listen to my complaints and was her gentle kind self. I am not all clear yet, but the worst part is over. Everyone at Crafted gave many kind and loving words. Thank you all for your care. Love, Scott 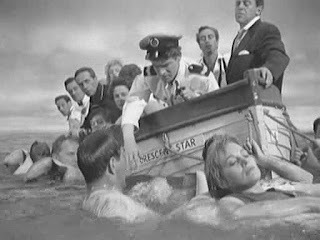 Posted by Scott Aicher at 4:54 PM No comments: 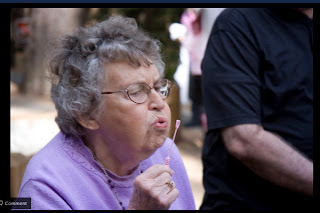 My Grandma Ardis passed away this week. She was a guiding light in my art career. She often cheered me on when she saw what I was creating. A talented painter and sculpter herself, she was a long standing helping member of her Canyon Lake community. She lost her husband shortly after the war to cancer. She held her family of 5 kids together by herself and never lost her love of her departed husband. Tragically she lost her son Don at the young age of 52 as well. She is now reunited with her husband Robert and son Don and is finally at rest. Being a fighter her whole life I feel she has finally returned home and is now at peace. (The photo is her at my sister's wedding)
Posted by Scott Aicher at 8:00 AM No comments: